This is a work of fiction. All names and places are fictitious.

“Of fuck! I am getting close.” I moaned as he continued to ram his hard dick into my tight ass. I was bent over the bed and he was fucking me from behind as I braced myself with one hand and stroked my cock with the other. I loved the way that Robert fucked me. He knew the exact position and rhythm to drive his cock into me and get the best results. I could easily orgasm just feeling the head of his dick sliding inside of me and never touch myself.

Robert placed his hands on my hips to give himself better leverage, a move he used when he was getting close and knew I was also close. This normally meant that he would be shooting his seed up in my ass about a moment after my own orgasm started. He told me once that when I started to orgasm my ass clamped down perfectly on his cock and gave him the perfect friction at the right moment.

Precum oozed into my hand as I continued stroking. I wanted to try to hold off a bit longer as it felt so good to have Robert inside me. It had been awhile since I had been fucked and the tension had really built up making it that much hotter and harder to hold off.

My body tightened as my dick started to throb signaling the forthcoming orgasm. My balls pulled up closer to my body as if ready to launch. Robert bent forward and placed his lips on my back. The warmth of his mouth was all that was required to push me over the edge.

“I needed that so badly” I said softly. “Me too” he replied still not moving. “You have an amazing ass” he added, and I could picture him grinning. “Are you ready to clean up before you have to go back to work?” he asked with a sigh. “Yeah that will be great” I said not wanting to untangle from him.

“When does your wife get back” Robert asked breaking the moment. “Tonight, at about 8” I said remembering I had to pick her up at the airport. She had been traveling a lot for work which meant I had time to spend with Robert. “What about your wife?” I asked. “She will be home after work.” He said quickly.

We made out as we cleaned off the sex. I got out of the shower first and dried off and started to dress to head back to the office. Robert followed soon after. “I’m glad you work from home” I said thinking how fortunate it was that we could meet like this. Robert did not answer and continued to get dressed. “Next week?” he asked as he pulled me to him for a last kiss.

“I will have to look at my schedule and let you know. I have to go out of town for work, but I am not sure of the schedule yet. I said trying to recall the dates. Robert nodded as we walked to the front door. A moment later I was in the car heading back to the office as if nothing had happened.

I drove back to the office feeling very relieved and a bit sleepy. I always feel that way after a good fucking. As I drove, I thought about how I introduced to sex with men. How realizing that I liked it and needed it changed me in many ways.

My story started back in my 20’s. I had graduated from college and had no direction, so I decided to join the Army against my family’s voiced concerns. The military taught me a lot of great lessons; how to care for myself, how to be a part of a team, how to become strong and independent and about sex with men.

I was in boot camp and feeling very alone. I was a scrawny kid, and our drill Sargent made a point of telling me that every day. As camp went on, I started to develop muscles in places I did not have them. My shoulders rounded, my biceps grew, my stomach flattened, and my legs tightened up. Seeing the results had a real effect on my confidence.

One night me and my 2 buddies; Jeff and Tony rushed into town. We had been on training maneuvers for 2 solid weeks without leave and we needed to unwind big time. Jeff was this big bear of a guy. He was about 6’4 hairy as a bear and had a big swagger that was intimidating until you knew him. Tony was closer to my size at about 6’. He was of Italian descent with dark hair and eyes and olive skin as if the tan were permanently baked in. Tony was much quieter than Jeff, but he had a way about him. Of the 3 of us he was the one that got the most pussy.

We had some fun, drank too much beer, but once again we came up short. When the bar closed, we headed back to the base. I was going to jerk off in the bathroom and fall asleep. By the time we got back I was feeling no pain. I flopped on my bed and started to quickly drift off. Some time later, I needed to piss. I went into the bathroom and as I turned on the light the image hit me like a ton of bricks.

At first, I thought I was still asleep. “Shut the fuckin light” I heard Jeff say in a loud whisper and I did as he said. “What the hell?” was the first words that came out of my mouth as realized what was happening. The light was only on for 10 seconds but in that time, I saw Tony on his knees sucking Jeff’s dick.

“Get over here” Jeff commanded, and I did as he said without thinking. Jeff put his big bear arm around me. “You’re not going to say a fuckin word, are you?” it was a command wrapped as a question. I looked down at Tony slurping on Jeff’s dick and shook my head no. I was just sort of lost watching what Tony was doing. I wasn’t immediately excited or repulsed just curious.

Tony took Jeff’s dick in his hand and pulled his mouth off. “Take your dick out” he said looking up at me. My eyes acclimated to the dim light and I could make out the grin. As I think back on that day, I am not sure why I did it, but without thought I reached in to my boxers and pulled out my dick.

It was flaccid as Tony reached for it. When his fingers came into contact with it, I jumped a bit. This did not stop him. He slowly started to stroke it then bent forward and started to lick the head. His tongue felt warm and my dick reacted to the attention.

“That’s it buddy” Jeff said with a chuckle. “Enjoy the best mouth on base” he added as if he were selling tickets to a sideshow. With that Tony went to work and swallowed my dick whole. He slide it back into his throat so far, I was sure it would come out the back of his head. My dick got rock hard and I closed my eyes and allowed myself to enjoy it.

“When you are ready to shoot your load, let Tony know. He likes it in the face.” Jeff said once again speaking up for Tony. Tony took turns sucking each of us. He would pull off my cock and run his hand up and down it while he moved his mouth to Jeff’s cock and then move back and forth with ease. 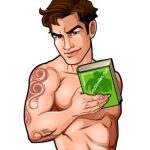 mwmondl
5
Bi Married man who loves to share my fantasies with other like minded people. Please feel free to drop me a line and share your ideas. All input is welcome.