I never understood why people made such a big deal out of Fleet Week. I mean sure, the old tropes about sailors on shore leave had some sentimental appeal, but in our post-Don’t Ask Don’t Tell world was anything seriously scandalous going to happen? Despite my skepticism Fleet Week also coincided with the official start of summer, so we were all going out. I’d been dating my boyfriend David for just about a month and we’d made plan to meet up with a few friends at The Boiler Room, a charmingly divey gay bar in the East Village.

It was early evening, and still fairly quiet so we grabbed drinks from the bar and posted up near the pool table. I had forgotten the fleet week was in full swing until a pack of young men in dress white’s ambled into the bar. It was pretty clear that most of them were straight, but it was nice to know that stigma had diminished so much in recent years that a gaggle of straight sailors wasn’t above scoring a few free drinks from fawning Manhattan gays. I was about to share this observation with a friend when I realized that most of our group had joined the loose chattering circle that had formed near the sailors at the bar. I chuckled to myself and re-racked the pool balls for another round.

David was just about to break when a lanky young sailor wandered over. He was young, no older than 22, but firm. I had to admit that he filled out the uniform nicely. His close-cropped dark hair and bright blue eyes made a nice contrast with the clean white fabric. He paused a second like he wasn’t sure what to say so I motioned to the table to indicate that he was welcome to take my place if he wanted to play.

“Thanks” he said smiling and picked up the cue. He wasn’t much of a talker but they shot a friendly game and when the sailor easily trounced David (he had many great qualities but his pool game left a lot to be desired) I played the winner. Despite his reserved manner we learned that he was from Texas, then he enlisted in the Navy because his older brother had and that this was his first time in New York.

“So what are you doing here?”  David asked, depositing another round of drinks in front of us. This implication was clear, but there was no reason to be pushy. I did get a curious vibe off the guy but that was his business.

“Oh, you know, the guys just wanted to come in and check it out,” he said glancing at his friends across the bar who were still holding court from the broken down couches that occupied a corner of the room.  “I’ve never been to a…bar like this before,” he said coyly. David glanced at me but I decided that answer was too noncommittal. We finished our game, shook hands, and rejoined our friends who by now were dancing enthusiastically to Britney. He made his way back to the group of sailors in the corner.

The night moved on as these things do. The crowd grew, people paired off, or went to look for a new location. Soon it was just me and David and we’d transitioned from dancing to an admittedly sloppy tipsy makeout session in a dark corner of the room. Out of the corner of my eye I’d caught our sailor friend watching us throughout the night and now was no different. At some point his friends must have taken off. I thought he left with them but now I noticed he was back, propped up at the bar looking slightly worse for wear (too many free vodka sodas I guessed). He was nominally chatting with a twink that was desperately trying to gain his attention, but his slightly glassy eyes were trained right on us. I held his gaze as I once again shoved my tongue into David’s mouth, giving his ass a very visible squeeze in the process.

“Look at the bar” I whispered into David’s ear as I spun around, pressing him against the wall and giving him a chance to look over my shoulder. I’m still not sure what he did, he must have mouthed something because the young sailor abandoned the bar and wandered over toward us. We broke our kiss, acting casual. I could see from the way he swayed slightly that he was relying on a bit of liquid courage.

“That’s cool!” David said smiling. He placed his hand on the sailor’s arm and gave it a little squeeze, skirting the line between friendly and flirty.

“I have to go to the bathroom,” I said calmly. Once again holding his gaze before glancing at David. It was now or never I figured. Either he’d read cues or not. I looped around the corner and opened the door to the single bathroom, pleased to find it unoccupied (a relative rarity) I ducked inside and left the latch open. David followed a moment later, pulling the sailor by the wrist. Subtlety wasn’t really a factor in this environment I guess, but there was something fun about pretending to slip away. We shoved the door shut and latched it. David moved toward the sailor aiming for a kiss but he quickly pulled away.

“I just want to watch.” He said nervously. Not what we were hoping for, but what the Hell,

I pulled David into me and we began to kiss. With my free hand, I gave the sailor a shove indicating that he should take a seat on the toilet and get comfortable. A moment later I noticed that he had unzipped his fly and pulled out his cock, a truly impressive nine niches that he was slowly stroking. Through his half-open fly, I could see a mass of dark pubes indicating a distinct lack of manscaping that was rare these days among gay and straight guys alike.

As I watched him stroke I slid my hands down to David’s waist.  Hooking my fingers underneath the waistband of his jeans and his tight briefs I pulled them down to his hips revealing his perfect bubble butt to our guest. I knew from personal experience that his twin perky orbs dusted with just the right amount of dark hair were a pleasant view.

I saw his mouth drop open, slightly, his eyes were trained on David’s ass. I reached down and gave his cheeks a squeeze spreading them to reveal his tight hole. The sailor sped up the place of his stroking. Guiding David we moved a little closer, so he could continue to admire the view as we kissed. I even slide my middle finger into David’s now sweaty hole, making him moan into my mouth. My own cock was rock hard in my jeans but I was focused on putting on a show.

Fortunately, my boyfriend is more than game, arching his back so that his ass is now inches from the sailor’s face, close enough to smell. He doesn’t move forward, but he also doesn’t move away, now jerking his cock violently as he stares into David’s musky hole. I could see that he was drawn to it, he just needed the final push.

Breaking our kiss again I spun David around. He was now straddling the ass drunk sailor, his hard cock inches from his face. David smiled as I gave his shoulder a firm but gentle press, pushing him slowly down onto the sailor’s now precum slick cock. He moaned theatrically as the man’s dick slid into his ready hairy hole. The sailor responded in kind, moaning so loudly I was sure the gays waiting outside the bathroom could hear him.

“I don’t…” he started but David leaned forward, pulling the now helpless sailor into a deep kiss as his tight hole slowly swallowed his hard cock, gripping it tightly in its warm embrace. The sailor struggled for a moment and then gave in to the kiss, pushing his tongue into David’s mouth and allowing his to be invaded in return. His nine-inches now nestled firmly in my boyfriend’s guts, I unzipped my pants and let my own hard cock spring free from confinement.

His zips still locked on the sailor’s, David began to slowly lift himself off the man’s slick cock before dropping himself down on it again, repeatedly skewering his own tight hole as he established a rhythm. I knew from experience that he was expertly clenching his hole to maximize the man’s pleasure as he took control of the situation.

I tapped David’s shoulder and he broke the kiss, correctly interpreting my signal that he was now free to focus completely on controlling the sailor’s cock with his perfect hole. The sailor gasped in pleasure as David’s hole embraced his cock with his full attention.

“Nuh…no…I can’t.” the sailor mumbled, seemingly experiencing a moment of clarity. That clarity was soon wiped away by the sensation of my boyfriend’s tight hole sliding up and down his shaft. Still, I thought, probably better not to leave anything to chance at this point.

Placing my hand firmly on the back of his head I slowly but forcefully pulled his mouth toward my own hard cock. He hesitated for a moment but I pushed forward, shoving the head of my cut 8 inches into his mouth, leaving a small smear of precum on his upper lip. For a moment he seemed not to know what to do so I grabbed him hair and gently eased him back and forth, showing him the right rhythm for sucking cock. To my surprise, he seem began to participate himself, running his tongue up and down my shaft.

I made eye contact with David who smiled a mischievous smile back and sped up his pace like the sailor’s dick was a dimestore dildo. I felt the man moan again, his lips still sealed around my cock. I would have enjoyed another minute of his attention but I wanted him fully engaged. I pulled my cock from his mouth and began to strike as David put his hands on his shoulders and began bouncing on his cock. David moaned and the sailor issued another guttural grunt as the orgasm overtook him, emptying his load into my boyfriend’s waiting hole. Still David didn’t stop, continuing to bounce on the sailor’s cock for a full minute as he milked another load from the young seaman. I heard the wet plop that indicated David slowly sliding off the sailor’s now deflating dick.

Before he could fully gather his wits David has already pulled his pants back on. I zipped up my own jeans and gave the young man a pat on his remaining dry cheek.

ethansummers
3
Ethan Summers is a writer of gay erotica and other things. Send an email to ethansummers800@gmail.com Find more of my work at https://summersdreams.substack.com/ Follow me at twitter.com/EthanSummer99 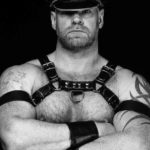